• • • ( • • ) • • • • • • • • • • • • • • • Letters From Iwo Jima is the 2006 to, which was also directed by, providing a to, the antagonists of the first film. It was widely well received and is commonly seen as being even better than its well-received predecessor. Inspired by the book Picture Letters from the Commander and Chief, a compilation of whimsically illustrated letters sent by the Japanese commander of the Iwo Jima garrison to his family, the film explores the back stories of some of Iwo Jima's doomed defenders (fewer then 1% would ultimately survive) in the form of their last letters home -- letters written but never sent. 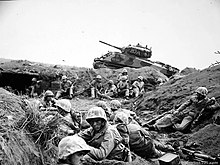 Tropes used in Letters From Iwo Jima include: •: The 'honourable' way of doing things according to the Empire, which includes ordering the entire battalion to go on a hopeless suicide mission. Many soldiers are clearly unhappy about this.. •: One man dies sitting upright with half his face gone during an air raid. There are also various limbs lost during the battle itself, people attacked with flamethrowers, blown up at point blank range. •: Kuribayashi withdraws his men from the beaches to fight from caves and tunnels rather then wasting them in the pointless (but honorable) suicide attacks his subordinates would prefer. Saigo also holds little truck with 'honorable suicide' for various reasons and prefers unconventional tactics (compared to IJA standards) in the field.

Needness to say, this doesn't make him too popular with some of his fellow soldiers. •: Kuribayashi uses the M1911 pistol that he got from another American general before the war. •: The torture of a captured Marine is a reference to Iggy's death in. Not to mention the soldiers who committed seppuku with grenades, whose remains will eventually be found by Doc and Ira.

•: At the end of the battle the sun dawns red over the sea, perhaps symbolising that despite the loss Iwo Jima will always belong to Japan. Or that Japan will always remember her own, wherever they fell, and for whatever cause. •: Lieutenant Ito. Tries to force his troops to accompany him in a reckless suicide attack, before leaving alone to attempt to take out a tank. Instead he pretends to be dead until the battle's over. And this is after he nearly kills Saito and Shimizu for following orders and retreating.